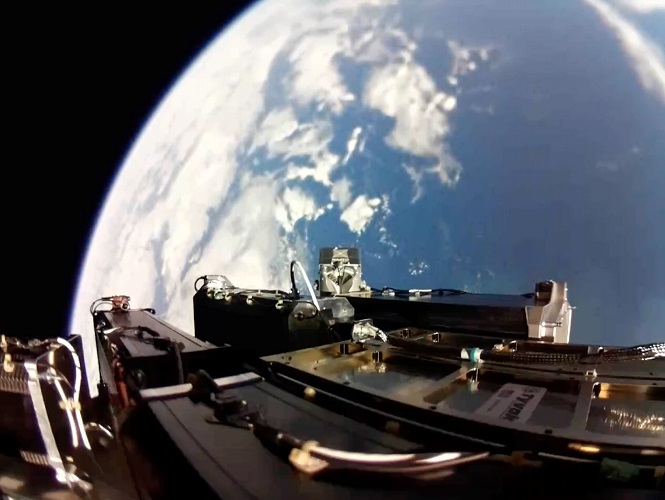 BLOG: The kick stage is a nimble but powerful extra stage on Electron, designed to circularize the orbits of small satellites. It takes small satellites exactly where they want to go, offering unmatched precision and flexibility for orbital deployment.

The kick stage is powered by the Curie engine, named after the physicist and chemist Marie Curie, and is developed and manufactured in-house by Rocket Lab. Much like Rocket Lab's Rutherford engine, the Curie engine employs 3D printing (additive manufacturing) techniques for speedy production.

Once in this circular orbit, the kick stage has a special way of deploying multiple satellites. It employs a cold gas reaction control system to precisely point itself to deploy satellites, and the Curie engine can be reignited multiple times to move to a different position. This means small satellites can go to independent, yet highly precise, orbits even as part of rideshare missions where they hitch a ride along with other satellites. This method also avoids the risk of recontact between satellites on deployment, as we can control exactly when and where each satellite is released. Essentially, they won’t bump into each other as they are released.

After all payloads are deployed, the kick stage has the ability to reorient itself and reignite the Curie engine one last time to perform a deorbit manoeuvre. This drastically lowers the kick stage’s orbit, enabling it to re-enter the atmosphere and burn up without a trace once its work in space is done.

Now, remember the second stage that was left in an elliptical orbit before the kick stage separated? It too is deorbited quickly and burned up, thanks to experiencing significant drag at the lowest point of its orbit where it dips into the Earth’s atmosphere. Rocket Lab designed this system specifically to leave nothing in orbit but the satellites we launch. We’re determined to be part of the solution for sustainability and orbital debris reduction in space.