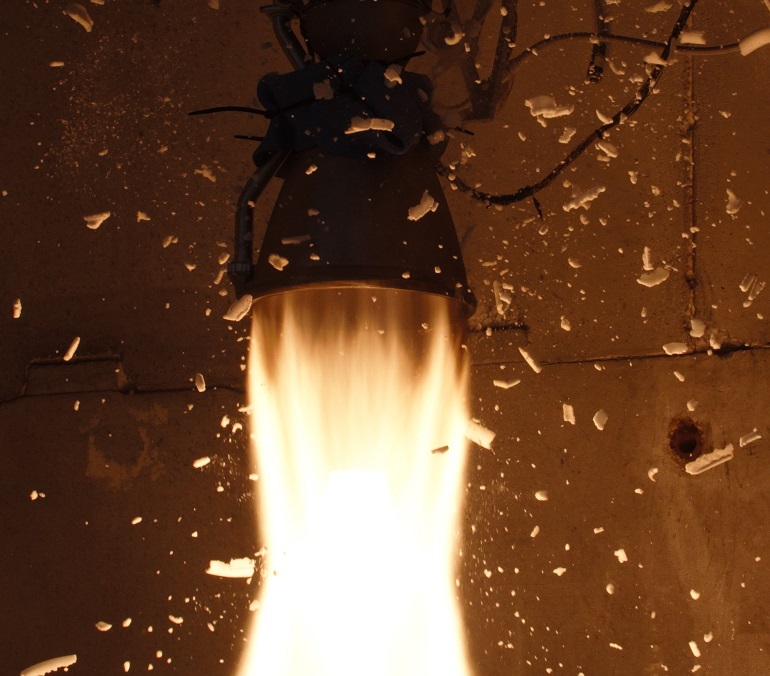 The engine was launched to space on Rocket Lab’s 26th Electron mission ‘There And Back Again’ in May 2022 before it was returned to Earth, caught by a helicopter and recovered at sea, and refurbished and successfully reused by Rocket Lab.

Rocket Lab conducted the full duration, full-thrust test fire of the refurbished Rutherford engine earlier this week at the Company’s engine test facility. The engine was previously successfully launched to space and returned to Earth during Rocket Lab’s recent recovery mission, ‘There And Back Again’, launched on May 2, 2022. The mission was the first time Rocket Lab attempted a mid-air capture of Electron’s first stage, using parachutes on the rocket to slow its descent from space before a helicopter plucked the rocket from the sky as it approached Earth’s surface. The Electron stage was ultimately released for a soft ocean splashdown, before it was collected by vessel and returned to Rocket Lab’s production complex.

The refurbished Rutherford engine passed all of the same rigorous acceptance tests Rocket Lab performs for every engine, including 200 seconds of engine fire and multiple restarts. Data from the test fire shows the engine produced full thrust of 21kNs within 1000 milliseconds of ignition and performed to the same standard of a newly-built Rutherford engine. This Rutherford engine will now continue as an engine life-leader for future Rutherford development.

Rocket Lab founder and CEO Peter Beck says: “We’ve always been at the forefront of innovation with Electron, having pushed the boundaries of many technologies including carbon composites, electric turbo-pumps and 3D printed rocket engines. Now, we’re leading the pack once again bringing reusability to small launch vehicles.

“Being able to refly Electron with minimal refurbishment is the ultimate goal, and so the fact that the recovered components on this engine performed on the test stand with minimal rework is further validation that we’re on the right path. If we can achieve this high level of performance from engine components recovered from the ocean, then I’m optimistic and incredibly excited about what we can do when we bring back dry engines under a helicopter next time.”

Preparation for Rocket Lab’s next recovery mission, which will include an attempt to catch Electron with a helicopter again but this time fly it back to land, is continuing at pace and is scheduled to launch before the end of the year.