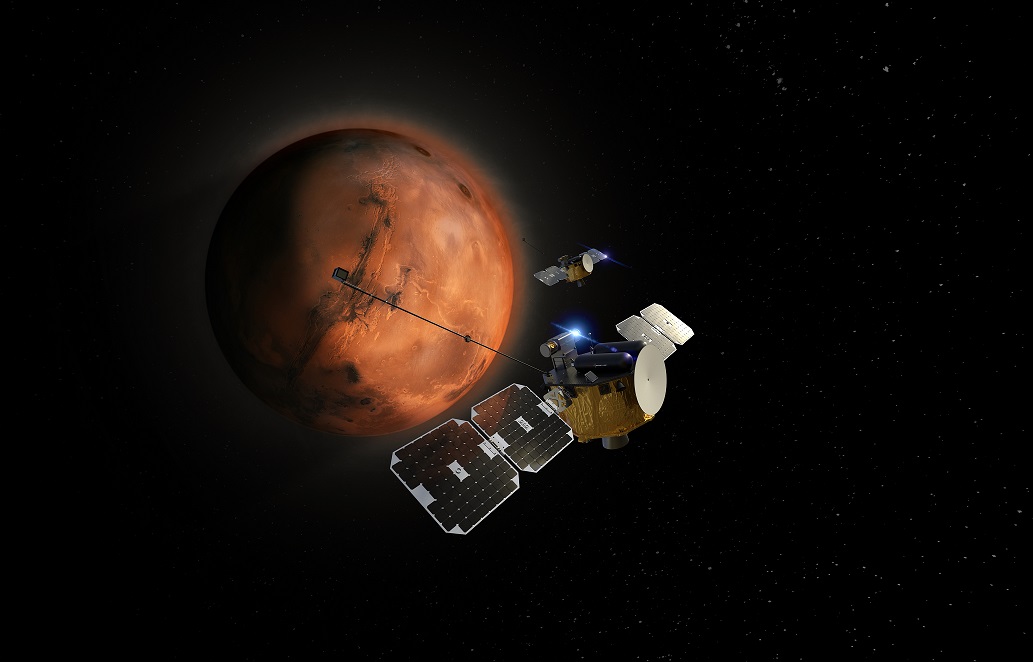 ESCAPADE is the latest of only three missions proceeding under the current round of NASA’s Small Innovative Missions for Planetary Exploration (SIMPLEX) program to conduct compelling planetary space science with small satellites and provide more opportunities for flight experience to the science community. The ESCAPADE mission, led by principal investigator Robert Lillis at the University of California, Berkeley, is the latest SIMPLEX mission to pass Key Decision Point-C (KDP-C), confirming it for implementation in preparation for launch to Mars in 2024. The ESCAPADE mission is managed by the NASA Science Mission Directorate’s Heliophysics Division and will be the first Heliophysics mission to visit another planet.

Following deployment from a NASA-provided commercial launch vehicle, the pair of Photons will conduct an 11-month interplanetary cruise before inserting themselves into elliptical orbits around Mars to begin the science phase. Both Photons incorporate satellite subsystems developed and manufactured by Rocket Lab, including star trackers, reaction wheels, ranging transceivers for deep space navigation, and in-space propulsion systems. By leveraging vertically-integrated spacecraft manufacturing, the ESCAPADE mission will be delivered at a fraction of the cost of traditional planetary missions. This supports U.S. national strategy for Decadal-class science by increasing the pace of scientific discovery and enabling more sustainable crewed exploration by improving our understanding of the space environment.

Rocket Lab’s founder and CEO, Peter Beck, says “ESCAPADE is an innovative mission that demonstrates that advanced interplanetary science is now within reach for a fraction of traditional costs, and we’re proud to make it possible with Photon,” he said. “Passing the Key Decision Point is a critical milestone in ESCAPADE’s development and is testament to the world-class science and engineering work of the UC Berkeley and Rocket Lab teams. We are delighted to receive the green light from NASA to proceed to flight.”

ESCAPADE is one of several missions beyond Earth orbit currently under development by Rocket Lab using the Photon spacecraft, including the CAPSTONE mission to the Moon in support of NASA’s Artemis program and Rocket Lab’s own privately-funded science mission to Venus.

Rocket Lab is a global leader in space, building rockets and spacecraft that make it easier to get to orbit and to do amazing things there. Founded in 2006, Rocket Lab provides end-to-end mission services that provide frequent and reliable access to space for civil, defense, and commercial markets. Headquartered in Long Beach, California, Rocket Lab designs and manufactures the Electron and Neutron launch vehicles and Photon satellite platform. Rocket Lab’s Electron launch vehicle is the second most frequently launched U.S. rocket annually and has delivered more than 100 satellites to orbit for private and public sector organizations, enabling operations in national security, scientific research, space debris mitigation, Earth observation, climate monitoring, and communications. Rocket Lab and Vector Acquisition Corporation (Nasdaq: VACQ), a publicly-traded special purpose acquisition company, announced a proposed business combination in the first quarter of 2021 (https://bwnews.pr/3yBYYzd). Vector’s shareholders voted to approve its proposed merger with Rocket Lab USA, Inc. at its annual general meeting of shareholders held on August 20, 2021. The merger is scheduled to close on August 25, 2021, and the common stock and warrants of the combined company, which will be renamed "Rocket Lab USA, Inc.", are set to commence trading on the Nasdaq Capital Market on August 25, 2021, under the new ticker symbols, “RKLB” and “RKLBW”, respectively.