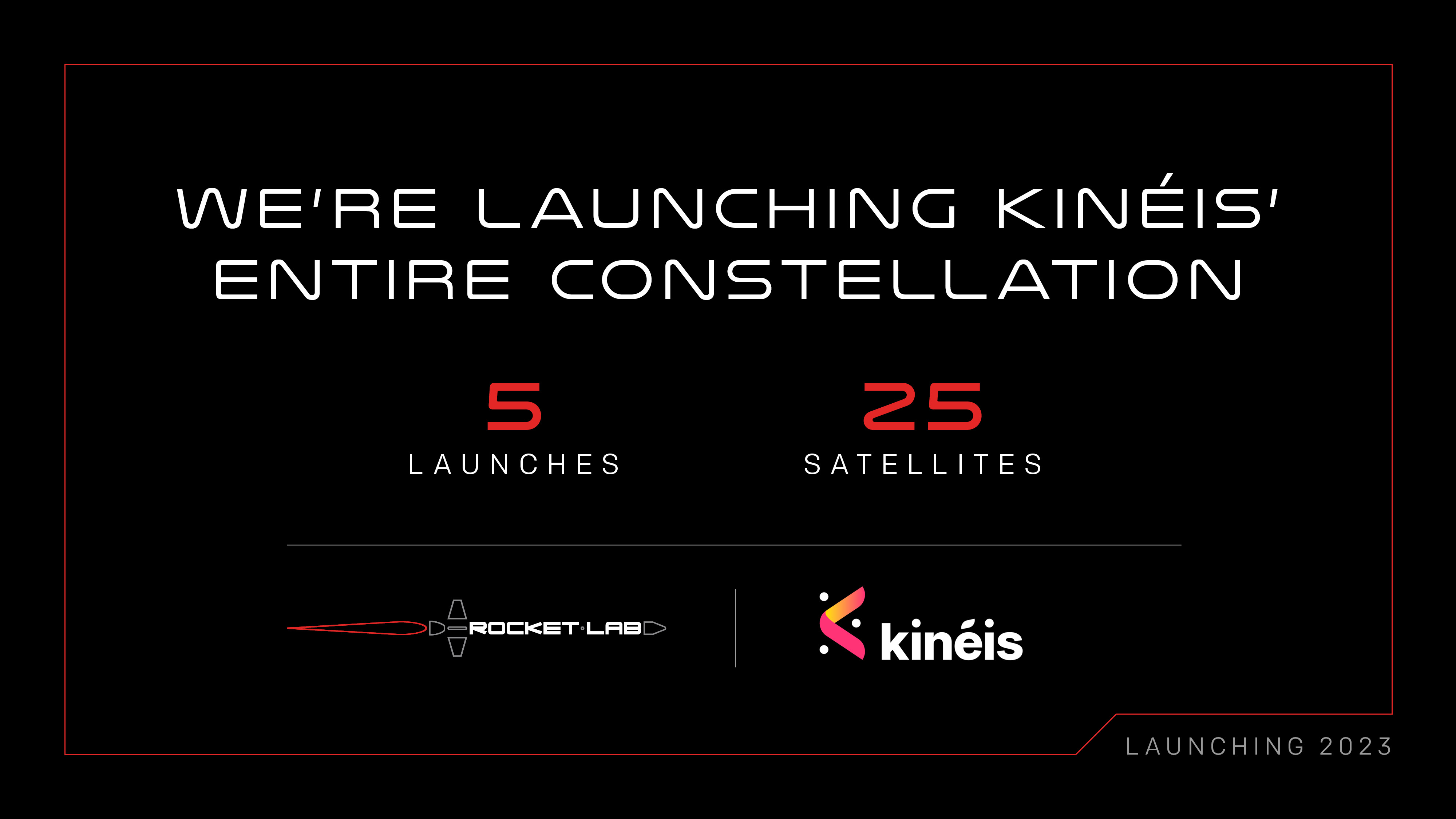 Scheduled for launch beginning in the second quarter of 2023, the constellation will enable Kinéis, a company backed by private and public investors including the French government’s space agency CNES (Centre National d'Études Spatiales) and CLS (Collecte Localisation Satellites) an international space-based solutions provider, to improve its global IoT connectivity. The multi-launch contract with Kinéis, which is subject to standard termination and launch rescheduling provisions, follows a similar bulk buy of launches earlier this year to deploy nine satellites across five dedicated Electron missions as part of a constellation for BlackSky, a provider of real-time geospatial intelligence and global monitoring services.

Kinéis CEO, Alexandre Tisserant, says: “We are glad to entrust our constellation of 25 satellites to Rocket Lab. They are the leaders in small satellite launch and the obvious choice as launch partner to activate our constellation at such a pace. We designed and developed our 25 satellites in record time with the support of CNES, Thalès Alénia Space and HEMERIA in order to deliver a full new operational service to our existing and future customers - we are now eagerly counting down to first launch in 2023!”

The proven accuracy and reliability of Electron’s Kick Stage in successfully deploying 100+ satellites to date was a decisive factor in Kinéis selecting Rocket Lab as its launch partner. The Kick Stage will act as an orbital transfer vehicle to deliver each satellite in the Kinéis constellation to their precise orbital planes at a 650km altitude, allowing Kinéis to avoid sacrificing spacecraft mass for propulsion and to begin a fully operational service as quickly as possible.

Rocket Lab founder and CEO, Peter Beck, says: “We’re thrilled to be Kinéis’ launch partner and look forward to delivering their constellation across five dedicated missions in quick succession. Deploying an entire constellation and having it operational quickly requires each satellite to be deployed to exactly the right orbit. Rocket Lab’s track record of exceptional orbital deployment accuracy provides Kinéis with that assurance. By taking care of in-space transport, the Kick Stage makes life much easier for satellite constellation operators, enabling them to maximize spacecraft mass for their payload.”

Kinéis currently operates the Argos system, an international scientific collaboration between CNES, the National Oceanic and Atmospheric Administration (NOAA), the European Organization for the Exploitation of Meteorological Satellites (EUMETSAT) and the Indian Space Research Organization (ISRO), to monitor wildlife, fisheries, and to collect data about Earth’s climate and environment through CLS. Kinéis’ new constellation will complete the current system with more powerful 30kg-class nanosats that integrate IoT technology and a ship-tracking Automatic Identification System (AIS). Once deployed, this technology will allow Kinéis to expand across multiple industries and scale from 20,000 devices connected to millions.

In addition to these missions, Rocket Lab will further contribute to the international Argos system with another upcoming Electron launch. Rocket Lab is the launch provider for the Argos-4 mission for General Atomics, which is developing the satellite for the United States Space Force on behalf of NOAA. That mission is currently scheduled to launch early 2022.

Created in 2018, Kinéis is a satellite operator and global connectivity provider. It inherited 40 years of expertise in the Argos system, founded by CNES (French space agency) and historically operated by CLS (Collecte Localisation Satellites). Its mission is to develop reliable technology that provides easy access to useful satellite data. To make life easier for professionals and individuals and encourage them to use its products and services, Kinéis locates and connects objects wherever they are on the planet. Thanks to its technological innovation capabilities, Kinéis forges links between New Space and IoT and connects hundreds of customers with satellite IoT. In Q2 2021, Kinéis won two projects funded by the European program Eurostars: Forestens (forest fire prevention) and Catset (a decision support toolset eartag for extensive cattle farming).

This press release may contain certain “forward-looking statements” within the meaning of the Private Securities Litigation Reform Act of 1995, Section 27A of the Securities Act of 1933, as amended, and Section 21E of the Securities and Exchange Act of 1934, as amended. These forward-looking statements, including without limitation expectations regarding the number and timing of scheduled launches, are based on Rocket Lab’s current expectations and beliefs concerning future developments and their potential effects. These forward-looking statements involve a number of risks, uncertainties (many of which are beyond Rocket Lab’s control), or other assumptions that may cause actual results or performance to be materially different from those expressed or implied by these forward-looking statements. Many factors could cause actual future events to differ materially from the forward-looking statements in this press release, including production delays or failures, design and engineering flaws, launch failures, natural disasters, epidemics or pandemics, changes in governmental regulations or in the status of our regulatory approvals or applications, or other events that force us to cancel or reschedule launches, including customer contractual rescheduling and termination rights,  and the other risks detailed from time to time in Rocket Lab’s filings with the Securities and Exchange Commission under the heading “Risk Factors” and elsewhere (including that the impact of the COVID-19 pandemic may also exacerbate the risks discussed therein). There can be no assurance that the future developments affecting Rocket Lab will be those that we have anticipated. Except as required by law, Rocket Lab is not undertaking any obligation to update or revise any forward-looking statements whether as a result of new information, future events or otherwise.